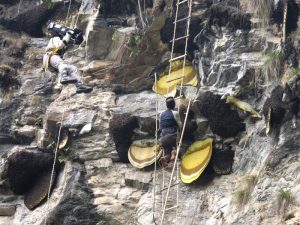 No doubt being a mecca of mountain film destination, Nepal is still unexplored for wild filming destinations where so many natural stories are still hidden. One of them is tradition wild honey hunting filming in Nepal. 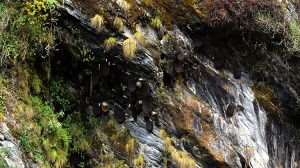 There are about 5 different honey species are found in Nepal. Apis Laboriosa is one of the biggest honey bees which nested in the high cliff of the mountain. These bee species play a vital role in pollinating mountain crops and wild flora. Honey Hunting is a very ancient practice of mountain people specially Gurung, Rai, Chantyal Community. The main area of harvesting Honey Hunting is mountain region of Nepal like Kaski, Lamjung, Myagdi, Baglung, Rukum in western area of Nepal as as practices in the eastern belt of Nepal. 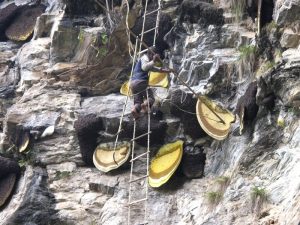 The red honey collected by Apislaboriosa bee during spring season from white rhododendron, Bikh (Aconitum spp.), Pangra (Entada scanders) and Niramasi are considered intoxicated. Intoxicating honey is not consumed locally while exporters benefit from the export of this honey due to its medicinal value and relaxing properties.

The Honey Hunting practices introduced in world by Eric Valli though his book “Honey Hunters of Nepal” The multiples film and documentary has made on Honey Hunting to give knowledge about traditional method as well as to show the adventure of Honey Hunting. 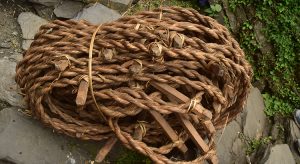 How do they do Honey Hunting?

Wild Honey Bees Harvesting can be done twice a year in May and end of September to early November. The village community can do only hunting in their own cliff they are not allowed outsiders to do hunting in their cliff. First, they will decide the honey hunting time by observing calendar from their priest or Shaman of the community. Tuesday is the best day for initiating honey-hunting event while Wednesday is not suitable for this event. Honey hunting is not allowed in 8th, 11th, 23rd, 26th and 30th day of moon cycle.

After the date decided by shaman, they start making parang (ladder for honey hunting) by collecting small bamboo from the forest along with other necessary equipment. There will be at least minimu 8 people necessary for harvesting – about 2 to 3 main honey hunter and rookie, 2 to 3 person for pulling rope and ladder, 1 main person to watch both sides Hunter and rope puller to co-ordinate between hunters and puller during harvesting and about 4 people to collect honey and making honey out of hives.

They will leave to the cliff by carrying all necessary equipment, food, shelter from the house where they have to stay at the cliff side min ¾ days for harvesting depends on the number of hives available in the cliff. They start harvesting honey after some ceremonial to worship god of the cliff. Mainly during worsip god they will sacrifice rooster to the god and start harvesting honey according to their rituals. In most of the area female are not allowed to go for harvesting Honey. As well as some communicate believe that they should not have sexual intercourse a night before leaving for Honey Hunting. If they do so it’s a bad luck for them and their god will get angry. In Myagdi, they do not sacrifice chicken as they believe their god do not accept sacrifice.

1          Prang (ladder) Made from bamboo fiber, 70 meters long (depending upon the height of cliff) and 2 cm in diameter. The steps are made of wooden planks

2          Uab (Rope)      A kind of rope used for tightening the ladder to the tree trunk on the top of the cliff. It is made of bamboo fiber. Its length ranges from 5-10 meters depending upon the distance between tree trunk and the cliff

3          Pechho (Rope) It is also a kind of rope used for hanging bamboo basket. It is made of Allo (Girardia diversifolia) fiber. Its length ranges between 50 – 70 meters

6          Tango/Ghochma (Stick)          A bamboo stick fixed with a sickle or wooden plate at one end, which is used for cutting combs during honey hunting. It is about 7 meters long depending upon horizontal distance between nest and cliff end

8          Koili chho (Rope with hook)    A rope fixed with hook and made of locally available fiber materials. It is around 14 meters long and used for separating the brood portion from honeycomb

9          Koho chho (Fastening belt)     A rope used for fastening honey hunter to ladder for safety. It is made of local fiber materials